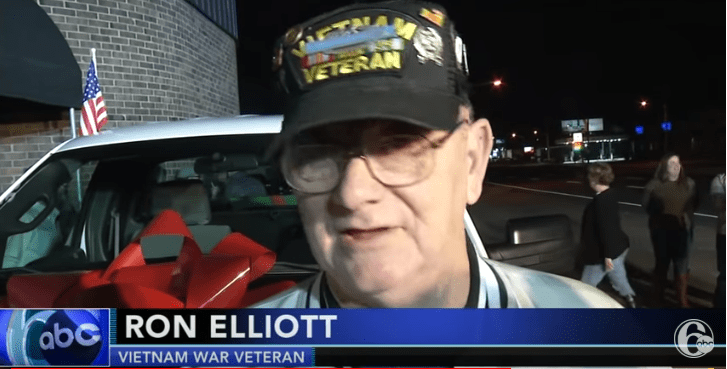 The boots polished to a high shine, and the rifles and helmets in a fallen soldier tribute, have accompanied many service members on the journey to their final resting place, in the bed of Ron Elliott’s truck.  “I transport the casket in here and I deliver them down at the cemeteries,” says Elliott.

It’s obvious that this isn’t just any old pickup truck. The sides of the truck are covered with names.

“They’re all Delaware Veterans, who died in each war,” Elliott says.  Names from World War II to the Vietnam War.

Ron fought in Vietnam, where he lost many friends. He hasn’t forgotten them, and he doesn’t want anyone else to forget them either.  “I figured I got to do something to make sure they’re never forgotten,” says Elliott.  He and one of his buddies started his first truck around the late 1960s, and it has become his life’s mission.

The current truck is a 2000 Ford F150, it’s his second.  “My Ford, the other truck, thousand miles on it. I’m running the highways,” Elliott says.  He’s traveled the tri-state area, Maryland, Virginia and North Carolina.

He even transported the body of the friend who first started this with him, to Arlington National Cemetery.  The sight of his truck was a bit of surprise there.  “Whoa, whoa, whoa, you can’t come through here right now, we got a funeral going on. I said I know, I got him in the back,” says Elliott.

For over 40 years, he’s done it all out of his own pocket. Even though it’s getting expensive, he’s never turned anyone down.  “I can’t take money for transporting a brother,” Elliott says.  Ron plans to continue his mission for as long as he can. However, he says the truck could use some body and mechanical work that he can’t afford.  “The hood, to get that redone, just painted, not with a decal on it. That’s $1,000,” says Elliott.  Ron says he’ll get to it little by little, but some of his veteran friends are working on helping him out.