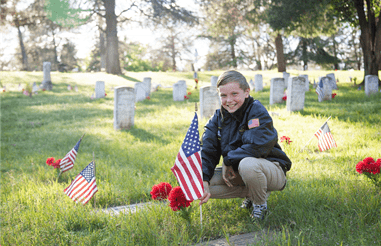 As of May 2019, Preston Sharp has traveled the country placing flowers and more than 200,000 flags on veterans’ graves— so all of America’s heroes will be forever remembered.

Preston Sharp proudly clutched an American flag as he followed his mom, April, across McDonald’s cemetery in Redding, California, to visit his Navy veteran grandfather’s grave.

But as the 10-year-old gazed around, he grew upset. There wasn’t a single other flag waving in the breeze. The cemetery is huge, surely there are other veterans buried here, Preston thought.Reaching his grandfather’s plot, his mom placed flowers as Preston planted his flag in the grass. “Thank you for your service,” Preston saluted.
But as they made their way back to the car, past all the bare graves, Preston balled his fists in frustration. “We’re supposed to honor our vets, not ignore them,” he said, sadly. “I know, sweetie,” April sighed, taking her son’s hand. Preston was silent most of the ride home, but then he suddenly piped up. “I know what I’m going to do! I’m going to get flags and honor every veteran in the cemetery myself!” “That’s a pretty tall order, honey,” April said. But seeing her son’s determination, she agreed to help.
A relative happened to have a bunch of flags left over from a political rally and happily donated them to Preston. A few days later, Preston and his mom returned to the cemetery, flags in hand.“Over here!” Preston called, spotting a stone that mentioned service in the marines. Placing a flag, Preston saluted and said, “Thank you for your service.”
When all the flags were gone, and the project was still unfinished, Preston started a Gofundme account with April’s help to raise money to buy more. Then a few of his friends volunteered to help Preston continue his mission.
“You have to speak their names out loud, then thank them for their service,” Preston explained to them. “A veteran’s name left unspoken is a veteran forgotten.”  It took six months to honor all 5,000 veterans buried in the cemetery with Preston’s grandfather— but this pint-size patriot was just getting started. “I’m going to make sure every veteran is remembered,” he told his mom with a big smile.  After spreading the word on Facebook and Instagram, donations of flags and money began to pour in. By Preston’s 11th birthday, April was driving to other cemeteries in Redding, then to other cities and states.
In January of 2018, Preston was even honored with a seat beside the First Lady during the State of the Union Address and was recognized during the president’s speech.  While in Washington, D.C., Preston made time to visit Arlington National Cemetery and honored the veterans there.

Today 13-year-old Preston has placed 200,000 flags at veterans’ graves in 28 states and is inspiring others to do the same with his “Flag and Flower Challenge,” stressing that it doesn’t have to be a special holiday to remember our veterans.  “We can honor them every day,” he enthuses. “We visit their homes, listen to their stories or take them out to lunch— anything to let them know we appreciate their sacrifice and service is perfect!” —