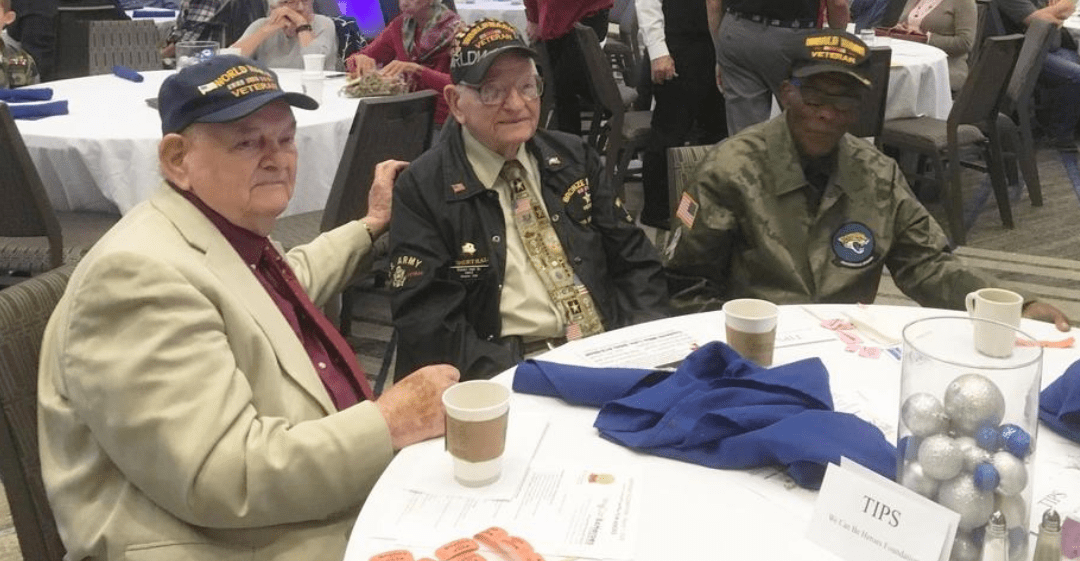 World War II veterans Frank Lovelace, (left) Robert Hall, Sr. (center) and Sollie Mitchell (right) were among the past military service personnel as well as Gold Star families honored during the Pearl Harbor Day Breakfast with Our Heroes in Jacksonville hosted by the We Can Be Heroes Foundation.

Jacksonville veterans Sollie Mitchell, Robert W. Hall Sr. and Frank Lovelace aren’t quite as spry as they were 78 years ago when they fought for their country after the Japanese attacked Pearl Harbor.  None were at the U.S. naval base in Hawaii when it was attacked. But all three World War II veterans left no doubt Saturday that they again would answer the call of duty to defend the nation.

Mitchell, now 101, was a 22-year-old college student he was drafted into the U.S. Army in 1941. “I was home on three-day pass when Pearl Harbor was bombed. I was stationed at Fort Benning, Ga. at the time and that was my first furlough,” Mitchell said.

Before seeing combat, Mitchell worked in the office of five-star Gen. Douglas MacArthur. A staff sergeant, he also was a firearms, munitions and artillery instructor. Mitchell received the Bronze Star in the Battle of the Philippines.

“Young people need to know and remember,” Mitchell replied when ask if history is at risk of being forgotten as veterans age and pass away.

Mitchell, Hall and Lovelace, 94, were among the veterans as well as Gold Star families honored during the Pearl Harbor Day Breakfast with Our Heroes hosted by the nonprofit We Can Be Heroes Foundation at the Sheraton Hotel on Deerwood Park Boulevard.

Hall said he was about 17 when Pearl Harbor was attack. Drafted in 1943, he earned the rank of sergeant and received a Bronze Star for his service. “America should never forget Dec. 7, 1941. It means everything,” said Hall, 96, as Mitchell and Lovelace nodded when asked about the significance of the event in history.

Lovelace, now 94, served as a gunner’s mate in the Navy. Neither he nor the others hesitated to serve. “No, not a bit. Everybody my age was going in, so I went and joined the Navy myself. There was never a doubt,” said Lovelace, who was 17 when he joined up.

The breakfast celebrated the service and sacrifice of the veterans as well as their families.

He recounted the story of Japanese Imperial Navy Capt. Mitsuo Fuchida, who coordinated and commanded the air attack on Pearl Harbor. Fuchida was a Buddhist and considered an honorable warrior like the samurai of old, Shoaf said.

Considered a brilliant military strategist by historians, Fuchida not only survived Pearl Harbor but also Midway, Guam and Hiroshima. After the war, he became a devout Christian and evangelist. Before dying in 1976 from complications of diabetes, Fuchida became the friend of the Rev. Billy Graham.

Also participating in the event were the Ponte Vedra High School Sharks for Heroes and the Atlantic Coast Young Marines.